Terrible terrible incident this evening with a modified clearing the turn three wall and getting into the catch fence. The car miraculously stayed on the track-side. Word is section(s) of the fence went down onto people in the pits. We saw at least 6 ambulances, cop cars, fire trucks, etc. Multiple injuries reported. Terrible terrible scene. They kept us in the parking lot to keep the track entry/exit clear for emergency vehicles. People crying in the parking lot and people trying to call people in the pits.

If anyone can find anything on social media in the next couple hours please share here. Very concerned for my local racers and their crews.

Thank you Andy unfortunately I can't browse Twitter thru chrome on my mobile browser.

We saw ambulances leaving thru the parking lot without sirens and not in a rush while we were waiting to leave the track. Praying that's a good sign.

The setup they have there is not condusive to safety. Pit members line the fence on their feet. Thank god they replaced the fence about five years ago. Without a doubt the car would've gone right thru the old one.

The track said everyone is ok. Here is a video.

Speedbowl14 said:
The track said everyone is ok. Here is a video.

Holy **** that could of been so much worse

wow crazy deal. Luckily it skipped over that opening.

I can't imagine. Five years ago they replaced the old fence...which if you wiggled it with your hand it'd shake 20 feet down from where you shook the post.
He would've gone straight through into the pits.

Speedbowl14 said:
I can't imagine. Five years ago they replaced the old fence...which if you wiggled it with your hand it'd shake 20 feet down from where you shook the post.
He would've gone straight through into the pits.
Click to expand...

kkfan91 said:
I know it's a money thing with a lot of tracks but you have to focus on safety
Click to expand...

Lots of rumors atm. At least two people taken to the hospital.

Track statement said everyone was ok...

Now maybe 8 people in the hospital, but it sounds like all will be OK.

We have lots of older pavement tracks around here where you can get right up to the fence even in the turns. Seekonk Speedway in Mass is another one where you can sit in the first row and be 2 feet from the fence.

This track has had a lot of improvements recently. They used to have an old ARMCO wall with dirt behind it. In the dirt were posts/cables of an old highway barrier. In a crash like this, the car would've snagged that "second wall" and in theory wouldn't have hit the catch fence or hit it as hard (although this crash was so violent I doubt it would've affected anything). When the new concrete wall and new catchfence went in this "second wall" was not replaced. In retrospect it probably should've with a modern high tension post/cable barrier.

Old fence/wall... you can see the cable barrier around most of the track above the ARMCO exactly for incidents like this. 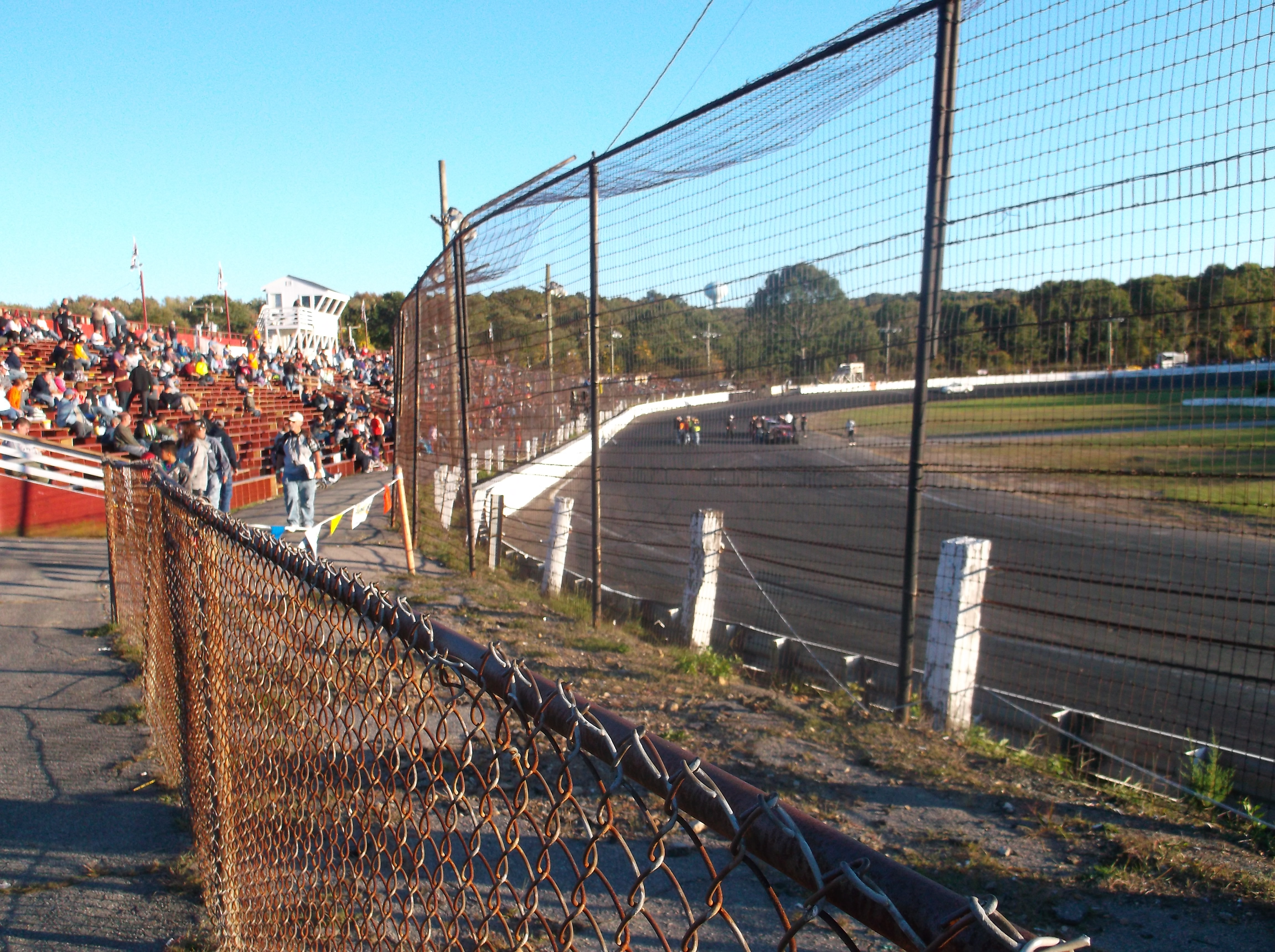 You can see a more modern version at Stafford where it's steel posts/cables at tension imbedded into the concrete. 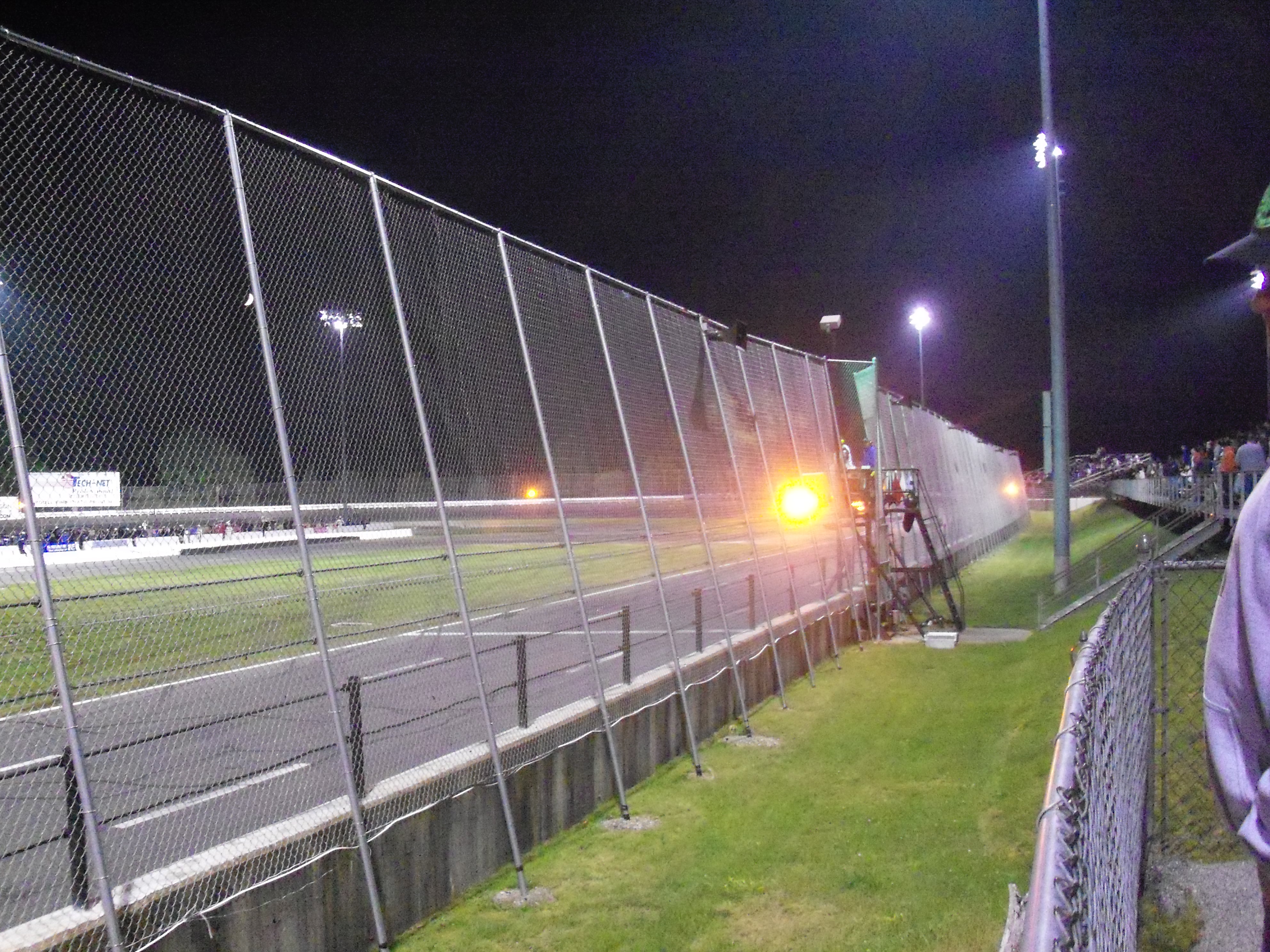