How good was Hut Stricklin? 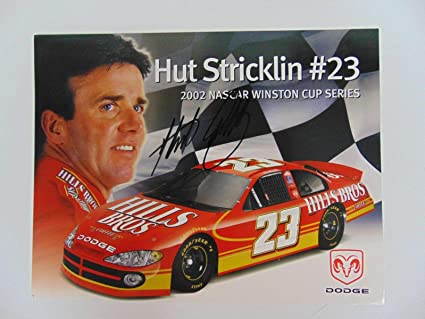 I couldn't sleep last night & Stricklin's name came to my head. Talk about a trip down memory lane. He appeared in NR2002 I believe. He was a pretty popular driver during his racing career, which saw him drive the Circuit City car.

What do you remember out of him? Is he on the same tier as another popular driver, Chad Little, who drove the John Deere #97?

He stopped racing in the Cup series @ the young age of 41. I find it impressive that he raced for 16 years & goes unnoticed when it comes to former Nascar drivers.

He was better than us.

He was solid! Had several good runs in the Reybestos #12 (beautiful car!) but couldn't get over the hump! He had the dominant car at Darlington one year when he was in the #8 Circuit City Ford. Ultimately, something happened and he lost it with only a few laps left.

He was highly rated by Neil Bonnett, Red Farmer and the Allison brothers and their boys.

Part of the gang.
H

Thinking back to seeing them race, though I was just a kid, the Chad Little comparison seems like a great comparison that I never would have thought of.

Bobby put Hut in his car and he actually ran really well but the finishes didnt show it. Like Aunty said he was an Alabama boy and part of the Alabama gang. Married Donnies daughter I believe

I really liked Hut! I thought he was a good driver, considering the equipment he was racing.

I think he's up there with Rick Mast and Dick Trickle as one of the best to never win a Cup race.

2 Sweet said:
I really liked Hut! I thought he was a good driver, considering the equipment he was racing.

I think he's up there with Rick Mast and Dick Trickle as one of the best to never win a Cup race.
Click to expand...

I'd put him in the same company you mentioned. Although he's a race winner I'd put Bobby Hamilton in there as well. Another guy with a looooong career but never had the best stuff.

The 1996 Southern 500 is the race I'm thinking of regarding Stricklin. He led a race high 143 laps but his car started to overheat late in the battle. Gordon passed him with 15 to go. Stricklin hung on for second.