Dont know if this has been posted

With no Cup race scheduled for Sunday afternoon, Podium eSports will broadcast “The Replacements 100” iRacing event on Twitch at 3:00pm/et.
Drivers currently scheduled to participate include Dale Earnhardt, Jr., William Byron, Alex Bowman, Bubba Wallace, Justin Allgiaer, Taylor Gray, Ben Rhodes, Harrison Burton and Justin Haley. Other in and out of the industry will also compete.
The link to watch is here:

I did in the wrong thread. But it belongs here..cast of characters. I never thought Chad Knaus would be a gamer. 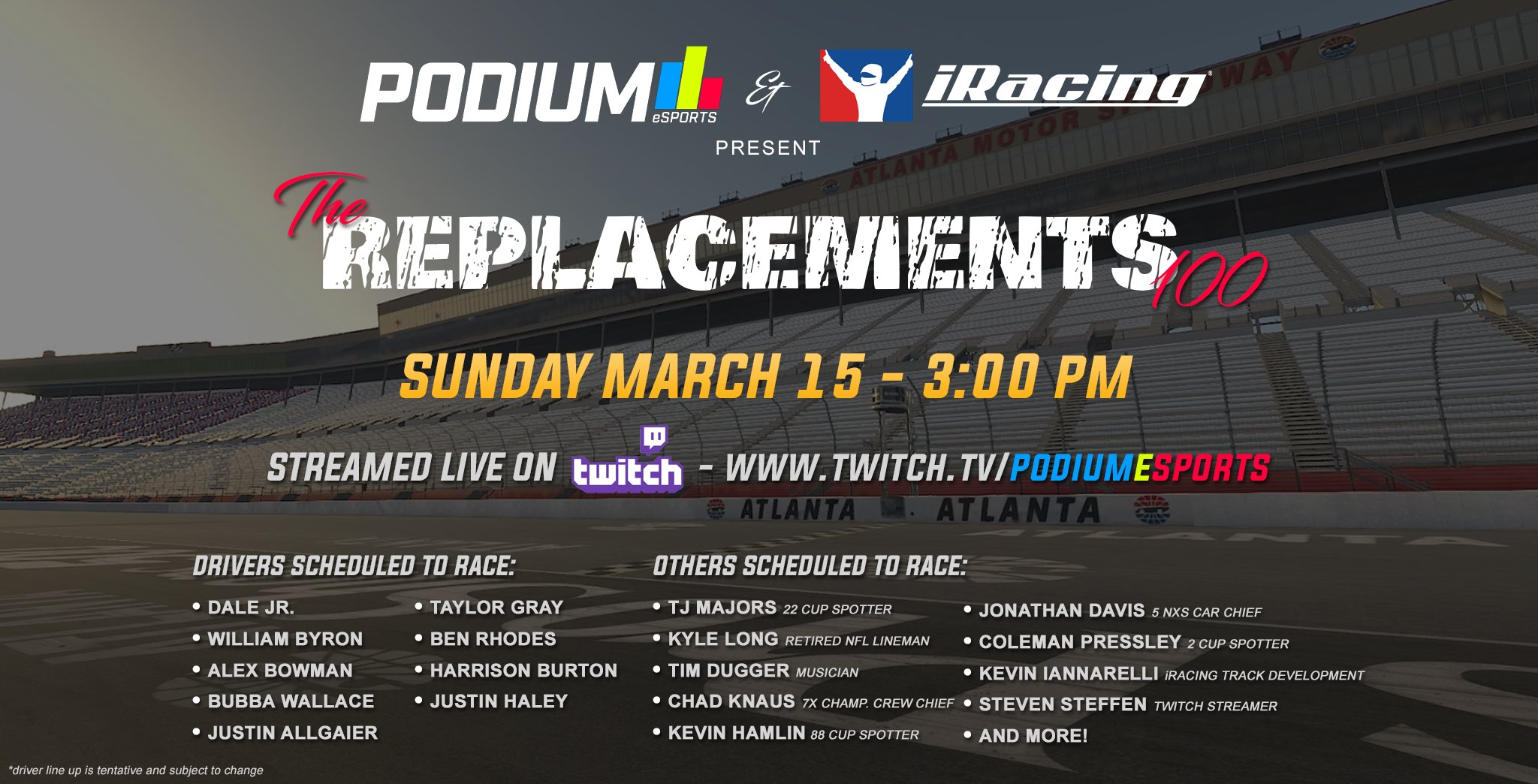 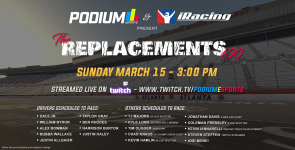 William ON A COMPUTER!! Byron

StandOnIt said:
William ON A COMPUTER!! Byron
Click to expand...

Get your chips and beer ready! We racin!

Hope we dont overload the server! Gonna load this link on the Firestick so can watch on the 65"!

Matt says among a lot of other things he is IRacing next weekend?

StandOnIt said:
Matt says among a lot of other things he is IRacing next weekend?

It's funny even racing reference created a results page for the race at Homestead.

I actually woke up this morning excited with anticipation to see this, whats happening to me ?

I was wondering when ringers might be added (like when road course specialist were hired by some teams).

This might be IndyCar’s first virtual race featuring a full field of its stars, but there are several drivers who could emerge as early favorites given their iRacing experience.


According to iRacing statistics, Will Power (No. 12 Verizon Chevrolet) has made 1,145 road course starts in the sim game, winning 156 times (13.6 percent). Power’s rate of top-five finishes is an astounding 46.5 percent. Yet, other drivers have even better marks.


In terms of career iRacing road-course wins among the entrants, McLaughlin leads the way with 178 and is followed by Power (156) and Karam (143).

Seven-time NASCAR Cup Series champion Jimmie Johnson (pictured at right, above, with Graham Rahal) has joined the field of IndyCar drivers as a “special guest” entrant for this Saturday…

i just don't know if i am ready to go here.

How do you say "Who is Biffle?" in so many different languages...

I'm caving and putting together a "budget build" for iRacing...Already have a wheel/shifter/pedalbox from my college days.

Is it a thrustmaster?

*WEAVER* said:
Is it a thrustmaster?
Click to expand...

What I'm putting together:

Going to start with a low-grade Radeon graphics card I already have, then upgrade to an XFX 580 once the credit card recuperates via the stimulus check.

I love the NFL as much as I love NASCAR, but there is no way I'd watch NFL players play Madden. And I sure wouldn't watch NBA players play 2K

I've been playing a fair amount of NBA2K lately after not playing it since the mid '00s. Great game, amazing how far it has come. I have the same level of interest in watching the stars play it as I do the iRacing shows. Which is to say I hope the people this appeals to have fun with it.

What a bizarrely-worded tweet. It should not be a surprise that a high-profile sports enterprise would try to make up lost programming, and eSports and event replays are pretty much anyone’s only options.

I miss basketball dearly, but guys mashing buttons on a PS4 controller wouldn’t seem to translate as well on TV to me as something like iRacing. Good for them trying though.

I'm like @gnomesayin... glad to see people enjoying the Nascar iRacing stuff on TV, but it's not for me. I don't care about Nascar drivers playing golf, softball, or poker either. Don't watch shows about Nascar wives/girlfriends. Can't wait for actual racing to return, but iRacing just doesn't interest me.

Slightly different skill set. Maybe if they had a home gym rig with a controller the shape of a basketball. Watching other's play video games is a fun sideshow sometimes...but man I can't wait for things to be back to normal everywhere.

Other sports leagues can't replicate their product through eSports the way NASCAR can. They'll literally be playing a videogame on an XBOX.

iRacing is a different animal.

“Multiple disciplines” getting a chance to be in primetime. Pretty cool.

FLRacingFan said:
“Multiple disciplines” getting a chance to be in primetime. Pretty cool.

I get excited if I see that Yeley is in a sprint car or midget again. I mean one not made from polygons.

This is an invitational show to quench an audience's thirst during a drought. Of course stars and draws are going to be prioritized.

I was wondering why Danica hasn't jumped on the iracing bandwagon, and now the mystery is solved. She can't feel it in her butt. She explains it in this video at around 4.00. https://www.yahoo.com/news/danica-patrick-really-thinks-nascar-175610036.html

Oh geez. Thanks for that image.

the virtual pro's of pavement race tonight on stream.