NASCAR is currently working on wholesale changes for the 2021 car. It’s going to be wildly different than what we see today.

NASCAR is trying to get back to “stockcar”. Currently, the cars are crude. Truck arm suspensions aren’t seen on any showroom floor. Additionally, most models offer some form of hybrid technology.

I wouldn't say most. In fact, GM is basically leaving hybrid behind, which is why they are not exactly embracing it for either NASCAR or IMSA.

It might be interesting, kind-of like how Indy cars had different boost settings, to have an electric motor/battery pack that could be switched on by the driver if he wanted an advantage on a restart or a surge at some point during the race...
However, as Formerjackman pointed out, auto manufacturers are moving on from hybrid cars so they might not be interested in supporting hybrid race cars.

Wonder how serious NASCAR is about truly being stock? Obviously they can't get too close to street cars and still run the speeds that they have been running, but will they require configurations and dimensions more in line with the street versions? If so, that would downsize the current "Camaro" and "Mustang" from what it is now - and make them more identifiable. But the Camry would have to be front wheel drive and at least look like it has four doors... maybe a new Toyota model would be eligible at that point. But more likely, if NASCAR continues to do what it's been doing since the first COT, the new NASCAR race car will be another hodgepodge of its own creation and fans will still only be able to really tell them apart by looking at the stickers.

Capping costs is a pipe dream. Racers, particularly at the top levels, will spend all the money they can get their hands on. Limit how much they can spend in one area, and they'll shift to spending extra to another area. Impractical to enforce.

gone said:
Wonder how serious NASCAR is about truly being stock?
Click to expand... 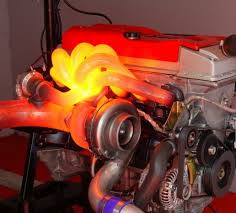 Nascar screwed the pooch back in 1988. Should have gone V-6 instead of using the restrictor plate. Would now be running naturally aspirated V-6 175/200ish cu in and/or turbo'd 4 cyl. Remember the Offy? Plus truck arms should have been gone back them. Along with 5" coil springs. So many dumb decisions.

Was never a big fan of the V6's and they ended being more expensive that the V8's were, but NASCAR SHOULD have done what Robert Yates (and myself) advocated years and years ago, a 302-310 max V8. And while they were at it, they should have stuck with production design cylinder heads and thrown away those foot high intake manifolds and gargantuan carburetors.