Outdoor season is here starting at Hangtown tomorrow. Anyone have predictions about who will exceed (or fall short of) expectations this year? Tomac will be seeking a third straight MX title, but I do think competition will be somewhat stiffer this year.

Here is the TV schedule. First motos will be on MavTV, and second motos mostly on NBCSN, with three races landing on NBC broadcast network, which is cool that the series is getting that exposure. 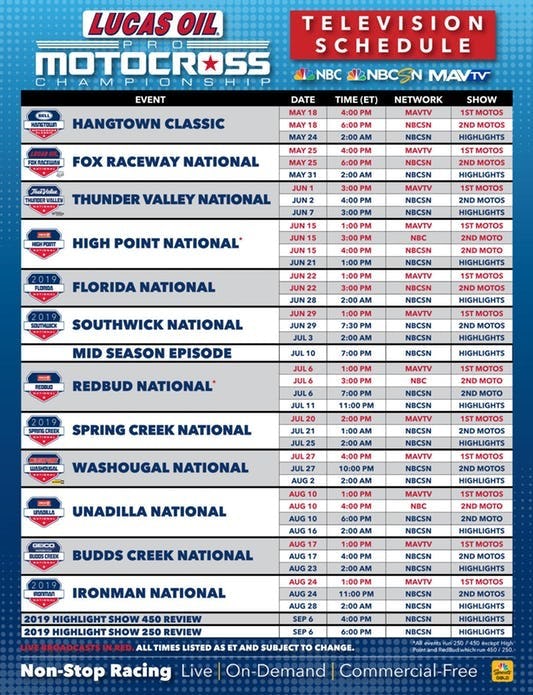 I just half watched the first 450 race with my other eye on Indy. Roczen dominated and looked great. Anderson looked very strong too and passed Webb for second in a good battle. Osborne 4th, Tomac a disappointing 5th somehow. Musquin even worse in 7th.

Should be a good series if these guys can stay healthy.

My bad, Tomac got back around Osborne for 4th on the final lap.

So glad to see Kenny back on the top step. Tomac rode out of his mind in the mud. Great stuff

DUN24 said:
So glad to see Kenny back on the top step. Tomac rode out of his mind in the mud. Great stuff
Click to expand...

Good race between Roczen and Tomac in the second moto. I had it on in the background and look forward to watching it again later. I agree, it's awesome to see Roczen out front again. I wonder if he was conserving toward the end of SX once he was out of the title picture.

I was also impressed with Anderson's performance.
Last edited: May 19, 2019

Not a fan of extreme mud races, but a stern test of endurance for sure. Roczen was in his own zip code for moto 1, and so was Tomac for moto 2. Both Anderson and Osborne looked good as well.

MX is so much better racing than SX, at least it was before the rain turned it to a quagmire.

LewTheShoe said:
MX is so much better racing than SX
Click to expand...

Agreed. Enjoying the races today. Good battle between Cianciarulo and Lawrence in the 250s.

I didn't see the first 250 moto, but the second moto was a barn burner. And Tomac teaching school in the 450's. Good fast track, the kind I like. I can't remember the lead announcer's name, but it's annoying how he wants to award trophies and points after two laps, LOL.

In the first 450 moto today, Roczen is leading by a wide margin, with Osborne in second and Webb in third. Tomac got a bad start and then had goggle issues and had to make a stop and is stuck in 10th.

Very good racing today. MX definitely is much better than SX in terms of showcasing pure racing talent. I'm glad to see Roczen up front and hope the series comes down to a fierce battle between he and Tomac. There are several riders just below them in a second tier that are making these races interesting to watch. Osborne and Anderson in particular are fun to watch because of their hard charging styles.

I'd missed last weekend's motos and got caught up on the 450 races from last week this morning before watching today's.

The dominance of Tomac and Roczen has lessened these past two weeks and it is more up for grabs between the top 5-7 guys, which is nice to see. Some interesting and varied results. Osborne and Anderson continue to ride very impressively to me. Webb is slowly getting better, but I'm not sure where he would be without his stellar starts. Musquin is finally coming on and took the overall win today.

I still need to watch the 250 races from these past two weeks.

Excellent races yesterday. It's a shame that Roczen is experiencing the fatigue / arm pump issues he is that caused him to drop through the field. The pure speed is still there, the stamina is not. I have a feeling those surgically repaired arms will never be up to certain tasks in grueling conditions.

That said, this is the strongest 450 class since I've been watching MX / SX closely. When the gates drop right now, there are seriously 5-6 guys with legit chances to win, and another 3-4 who are riding well. Part of the suspense is Tomac's inconsistency and Roczen's lingering health issues. But Osborne is blazing fast and emerging, Anderson is strong and reliable, Musquin is finally performing as expected, Webb is getting better as the season progresses, and there are cool surprises like Fred Noren.

After watching these last few rounds, I am firmly in agreement with those who say that SX is a pale imitation. What I've enjoyed most this year is that these guys are competing hard but clean, with very little rough stuff.

There are surgical remedies for arm pump, but I doubt that is Ken Roczen's main problem. His arms have been through quite a saga, and the fatigue issue may be a whole different deal not related to his arm injuries. I certainly wish him the best.

SX is inferior racing in my eyes, but it is the championship that has the greater prestige and financial rewards. I think it's unfortunate that the SX season basically prevents the top U.S. riders from contesting the FIM grands prix... because no one is willing to pass up the SX season.

I liked the races Saturday, but that track was rough and brutal. Tough day at the office.

LewTheShoe said:
There are surgical remedies for arm pump, but I doubt that is Ken Roczen's main problem. His arms have been through quite a saga, and the fatigue issue may be a whole different deal not related to his arm injuries. I certainly wish him the best.
Click to expand...

It seems your hunch is correct and it's not the arms. Here is Honda's PR statement for the weekend:

Physical Issues Hinder Roczen at Southwick
Although the warm, humid weather and rough, sandy track meant that Southwick, Massachusetts’ The Wick 338 National was anything but easy, what likely made things even more difficult for Team Honda HRC’s Ken Roczen were the absolutely brutal conditions of the previous week’s Florida National in Jacksonville. So challenging was that event that it apparently reignited the endurance issues that had plagued the German for much of the AMA Supercross series, but that he had largely put behind him for AMA Pro Motocross, in which he had posted a pair of overall victories prior to this, the sixth round. Roczen once again showed impressive speed in the early going of both motos at Southwick, setting quick lap times and making strong passes, only for his physical limitations to then thwart his progress and see him overtaken by several competitors. In the end, Roczen’s 12-10 scores held him to just ninth overall, but he and his team are determined to continue working for solutions in an effort to secure a strong second half of the outdoors season.
Click to expand...

Some have suggested that his endurance could have been hampered by heavy doses of antibiotics during his recoveries. Regardless of the cause, I agree that I hope he can continue to perform at a high level, as he's a pleasure to watch.

I was so pumped when he won earlier in the season. He's had a rough go.

Spring Creek turned out to be a pretty good race after all. I was surprised how well the track held up after so much rain early in the day. Cooper Webb broke his duck in convincing fashion, qualifying P1 and winning both motos. Ken Roczen was strong to the end in moto 2. He led much of the race after Webb had a minor crash, but Webb fought back to nip Roczen at the end. It was encouraging that Roczen's race pace was strong to the very end of the moto. He was 14th in moto 1, so not on the podium for overall. Zach Osborne and Eli Tomac took 2nd and 3rd overall.

I didn't see Webb's post race interview, but I'm sure he was as cringeworthy as ever, LOL.

Tomac leads the points by 38 over Musquin, with four rounds to go. He's not a lock for the championship, but barring injury he seems the prohibitive favorite. @gnomesayin, will you be attending at Washougal?

Man - Tomac ripped them a new one at Washougal. He came from about mid pack
on both of the moto starts to win both.

LewTheShoe said:
@gnomesayin, will you be attending at Washougal?
Click to expand...

Unfortunately no, I had other commitments and couldn't make it work to go.

Tomac is so fast at Washougal. Obviously the place suits his style, but his relatively easy climb through the field in the second moto had me questioning what it is about that track, as in general it seems to be a tighter track that can be hard to execute passes on.

Webb took a major step forward at Spring Creek, but wasn't as strong this week. Roczen was able to ride well and didn't fade too much, which was encouraging.

Ferrandis was impressive on the 250 side and that was a good battle between he and Cianciarulo.

Adam Cianciarulo is now officially signed to take over Kawasaki's other 450 seat next year for SX and MX, becoming Tomac's teammate and replacing Joey Savagty, who will presumably catch on with a lower tier team. Savagty has shown speed but no ability to hold it together for full races, and generally makes way, way too many mistakes. I would look for Cianciarulo to perform initially somewhat as Zach Osborne has. He should be a factor and top five threat some weeks, but he also has a tendency toward mental lapses and errors. I look forward to him mixing it up with Webb, as he's another guy who Webb doesn't like.

This is another move that will make the 450 class stronger and the 250 ranks weaker.

Based on how last year's 250 season went for Savagty, I was surprised he got the Kawasaki 450 ride to start with. I thought he did well in SX, but it was just a one-year deal. Think his best bet is Suzuki.

Great weather and good racing at the Ironman in Crawfordsville yesterday. There was a good turn out for the race. After the race was over we shot over to Kokomo speedway for a sprint car race on Sat night.
You must log in or register to reply here.
Share:
Facebook Twitter Reddit Pinterest Tumblr WhatsApp Email Link
Top Bottom