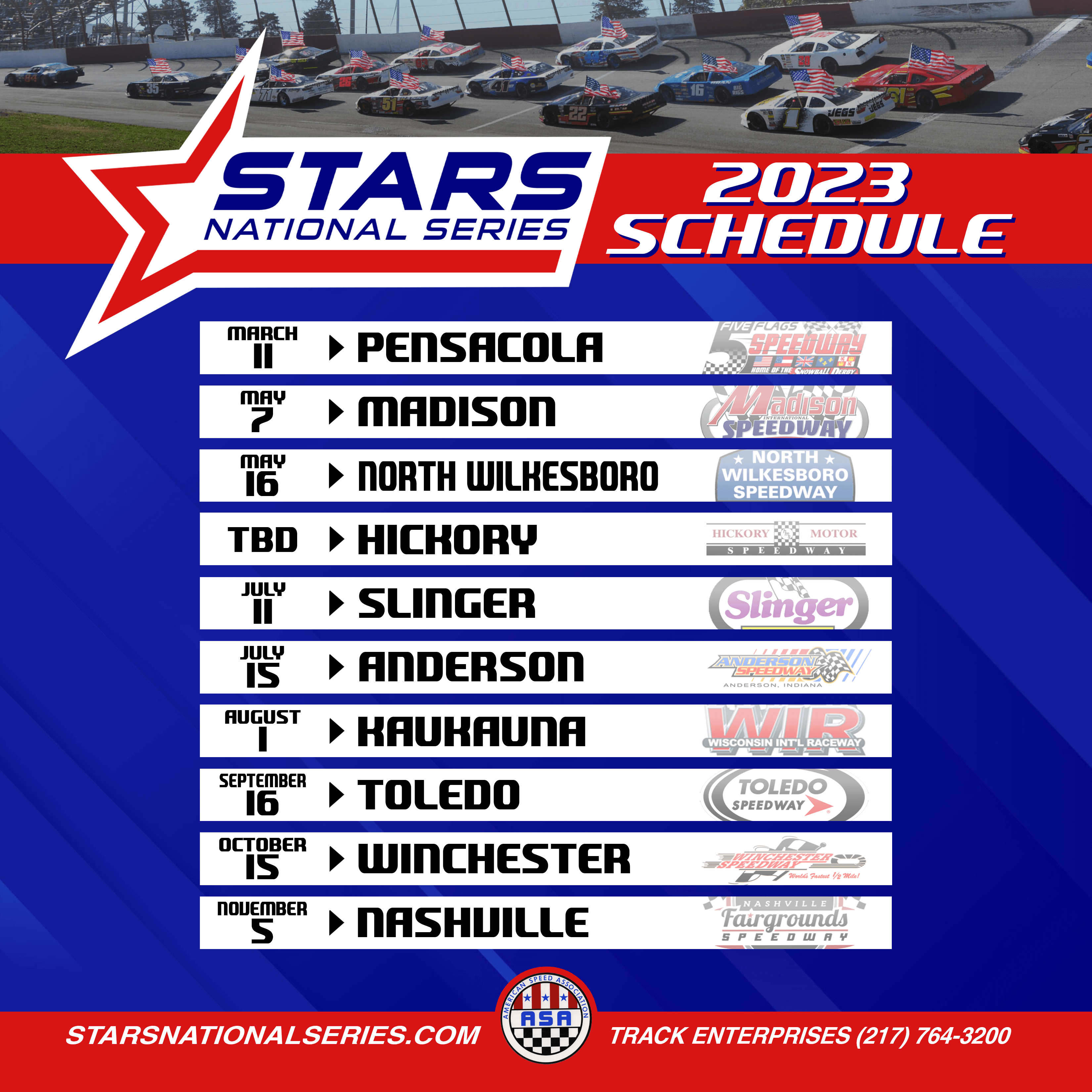 The highly anticipated 2023 schedule for the ASA STARS National Tour has been unveiled.

The highly anticipated 2023 schedule for the ASA STARS National Tour has been unveiled. The inaugural pavement Super Late Model series will feature 10 major races in six different states with a $100,000 point fund.
Series officials made the announcement on Saturday during a meeting with drivers, crews, team owners and media at the Performance Racing Industry show in Indianapolis, IN.
“This schedule represents the best in pavement Super Late Model racing,” stated Bob Sargent, President of Track Enterprises, which owns and operates the STARS National Tour. “We are proud to work with all the tracks on the schedule and we believe they will provide some great racing in 2023. We know this schedule will be a great cross-section of Super Late Model racing in the U.S.”

The series previously announced its series opener on Saturday, March 11, 2023 at Five Flags Speedway in Pensacola, FL. After a break in the month of April, teams will make the trek to the Midwest for the Joe Shear Classic at Madison Int’l Speedway in Wisconsin.
STARS will then venture to North Carolina for the next two stops. On Tuesday, May 16 the national Super Late Model series will travel to the famed North Wilkesboro Speedway as part of the festivities during the NASCAR All-Star Race Weekend. After that, it will be a stop at another legendary racetrack, Hickory Motor Speedway in late May or early June. The official date is expected to be announced soon..
The series will have two races within four days in the month of July and both races are marquee events at quarter-mile facilities. On Tuesday, July 11, the Slinger Nationals at Slinger Super Speedway in Wisconsin will host the ASA STARS National Tour. That will be followed up by the Redbud 400 on Saturday, July 15, at Anderson Speedway in Indiana.
The month of August will see STARS travel back up to the Badger State for the prestigious Gandrud Auto Group 250 at Wisconsin Int’l Speedway.
The longstanding Glass City 200 at Toledo Speedway in Ohio will be the sole race in September.
The final two races of the inaugural season for the ASA STARS National Tour will find competitors battling in a pair of 400-lap events. The Winchester 400 at the World’s Fastest Half-Mile, Winchester Speedway, will take place on Sunday, October 15. As previously announced, the series championship will be decided at the All American 400 at the Nashville Fairgrounds Speedway on Sunday, November 5, 2023.
With the exception of the All-American 400, all races are events derived from the regional Super Late Model Tours, the ASA / CRA Super Series, the ASA Midwest Tour and the ASA Southern Super Series.