Been fairly impressed with how the Truck Series has remained steady of decent teams, new entries, etc. 34 trucks at Iowa & 33 at Texas for the Triple Truck events.

It's almost like that's what happens when you have a series with a decent aero package that doesn't change all the time, and a chassis/engine that remains consistent. I wish NASCAR would run more things like they do in the Truck Series.

AuzGrams said:
Been fairly impressed with how the Truck Series has remained steady of decent teams, new entries, etc. 34 trucks at Iowa & 33 at Texas for the Triple Truck events.

It's almost like that's what happens when you have a series with a decent aero package that doesn't change all the time, and a chassis/engine that remains consistent. I wish NASCAR would run more things like they do in the Truck Series.
Click to expand...

That's pretty much nonsense if you have been following all of the changes they made with the spec? engine and teams building their own to out run it last year, and the last minute upping the HP on the spec engine to defeat the big money teams efforts right in the middle of the playoffs. Now if you can ignore all of that, yeah it has remained steady.

The best thing about the truck series is that "the experts" on what is good racing don't follow the series very closely and pick apart every little thing.
A

I was talking more about the bodies and chassis, but okay

Only the name still exists. Shortly after the stores closed for good, another company bought the name and sell products online. I don't think they have any stores.

agreed...I thought they went bankrupt
A

A full season for the 18-year-old was always dependent on sponsorship dollars, and a part-time schedule was always a possibility. That possibility is now a reality. Ankrum will sit out at Iowa Speedway, World Wide Technology Raceway at Gateway, and Canadian Tire Motorsports Park.

The young driver explained the lessons he’s already learned from this experience.

“The only thing to learn from this is to work harder. What I’m going to learn the most here is appreciating how hard people work around me to help you find the funding. Even though we don’t have that right now, I think we can get it. If not for this year, maybe the next.

“I don’t think we’re going to miss a whole lot of races. You won’t see me leaving anytime soon. This is just a speed bump in the road. We still have speed week in and week out. I feel like we are the best truck team in the shop at DGR – Crosley. I think the result at Texas, even with all of the complications, show how fast we are.”

Although Ankrum won’t be in the truck at some races during the season, he will travel with DGR – Crosley’s truck team, as well as the ARCA Menards, K&N Pro, and late model teams to help out and learn as much as he can. He will also be on stand-by in case he is needed as a substitute driver for one reason or another.

“I’ll be at Iowa,” Ankrum said. “Wherever I can help out, I love racing in general. I’ll be at other tracks as well helping out however I can, working in the shop. Even though I’m in the truck with new guys like Bono (Kevin Manion) and the crew, I still hang out with the K&N guys from last year all the time.

“The comradery in the shop works very well. Not just from my team but from every team and series that we race in. I’ll be at the Truck races, K&N, and short tracks, but I intend to do much more than that.”

Ankrum had been hopeful that Iowa was still a possibility after he earned a career best finish, third, at Texas Motor Speedway last weekend. The 2018 NASCAR K&N Pro Series Champion will run at least six more races for the second-year Truck Series team.

While most of the six races are still being decided, Ankrum believes he will likely be in the No. 17 Toyota Tundra at Chicagoland Speedway and possibly Michigan International Speedway. He intends to work harder moving forward to get more opportunities solidified.

“The six races we have left are definites, but there’s a possibility of having more,” Ankrum explained. “That is the one thing I want everyone to understand is that we have six races left no matter what. There’s always a possibility for more. We’re still working hard to find the funding to keep on going.

“Definitely at the moment we are going to miss Iowa and Gateway, we don’t know what’s going to happen after Chicagoland which I think is Bristol and Michigan. It’s all about time and place, being at the right place and right time, finding the right people and making the right relationships.

“The biggest thing for us right now is to finish up front and win races, and just show the world that this is worth the money and the sponsorship.”

In his six races this season, Ankrum earned one top-five and three top-10 finishes. He led 9 laps on route to his third-place finish at Texas. The third-place came despite a flat tire on lap one for Ankrum, two brushes with the wall, and a spin down pit road.

Ankrum admitted that the Speedycash.com 400 at Texas felt like a victory despite the chaotic nature of the race.

“It felt really good honestly. It felt like a win considering how hard we worked all weekend, how hard we’ve been working in the past few weeks to get this truck prepared as much as possible. Having a flat tire on lap one, hitting the wall twice, spinning down pit road, I was two laps down twice.

“It was just a wild race. I was whooped at the end of that thing. I raced so hard, pretty much raced everyone in the field from the top to the bottom. I had a blast. That was probably one of my favorite races that I ever raced in. I can’t wait to get out there and do it again.”

Despite missing three races earlier in the season due to age restrictions, Ankrum had quickly climbed to 15th in the championship points standings. He was 221-points behind points leader Grant Enfinger and 135-points behind the playoff cutoff, held by Harrison Burton.
Click to expand...

Tyler Ankrum will reportedly S&P the NEMCO 87 to keep his playoff waiver.

The fact that this guy can run 3rd last week and not have a full season sponsorship, but Natalie Decker is fully funded, is the biggest problem with NASCAR today. 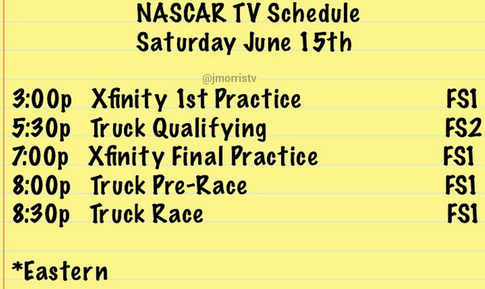 Yes even though it’s just online and no Brick/Mortar stores, they are sponsoring a race and a car. Which is so crazy to me! Now they just need to find Hut Stricklin and have him make a cameo this weekend.

Chandler Smith 2 tenths over the field in his first practice in a truck and with KBM. Hot seat for Burton and Gilliland now smoldering

If Smith wins this week, two thirds of my bold prediction would be fulfilled within eight days. 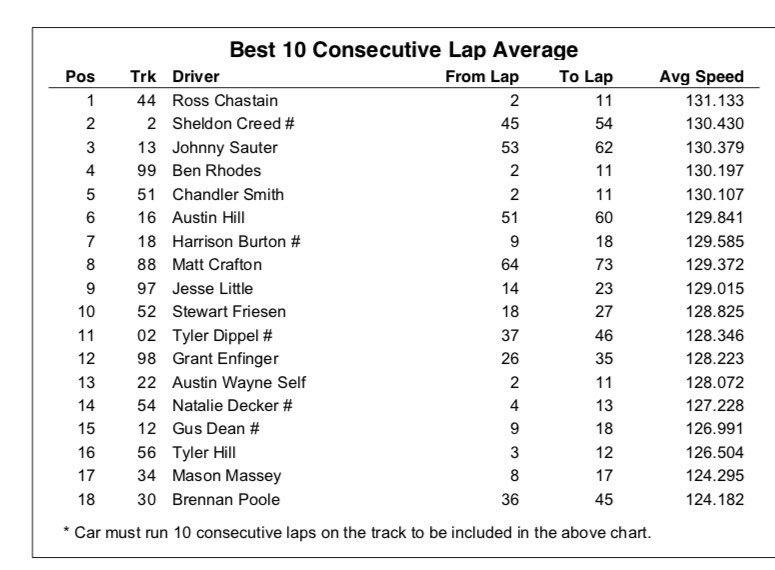 I like how Ross looks this weekend, he’s my pick for the win

Severe thunderstorm watch until 9PM CT in the area. Not good for drawing a crowd tonight to lure Cup but not much you can do.
A

Hope they get some of it in if they can

StandOnIt said:
Hope they get some of it in if they can

Double header on Sunday sounds like a plan to me.
A

I hope they get it in late, I heard the radar looks decent

Nothing like a Saturday Night Short Track Feature, if we can even get the race in

Jordan Bianchi‏ @Jordan_Bianchi
Tonight’s Truck Series race at Iowa Speedway has been postponed due to rain. NASCAR has rescheduled the race for noon ET on Sunday. FS1 will broadcast the race live.

19 looks better than ever.

Yeah, I've never known the Iowan events to be of much trouble myself. 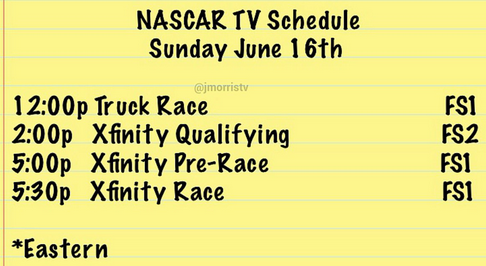 It's a damn shame politics, casinos, and half assed manufacturers races at Michigan is blocking a Cup race from Iowa Speedway most likely..

DaBiff1618 said:
I like how Ross looks this weekend, he’s my pick for the win
Click to expand...

Big blow to Niece Motorsports. Can't imagine this is good momentum for this team to fail inspection.

Figures they take a win away from a small team. Joey’s magical setup last weekend had no issues of course. I will be shocked if they ever do it for the money makers but mid pack teams ye be warned
A