New "what are you listening to thread"

Loretta Lynn, Tom T. Hall, Merle Haggard, George Jones, Waylon Jennings, Hank Snow, Ernest Tubb, Keith Whitley, all the good country singers are pretty much gone except for those who stick with the original format of country sounds.
I likes many different styles of music from Broadway show tunes, light classical, big band sound, light jazz, country up to the early '90s, pop from the 30s, through the 70s when things began to change. Just can't sync up with so much of the modern sounds and screamer singers that sound like their testicles or boobs are caught in a wringer. I get it that some, or many, might disagree but I'm old school and quite honestly, just plain .........old.
I like Clyde Thornhill, Les Brown, Glenn Miller ( who can't relate to Moonlight Serenade or Stardust?) and the old country singers. But I'm repeating myself.

Not everyone likes my choice of music and when I was younger, they had juke boxes with 6 selections for a quarter and we danced in he open space behind the bar stools while waiting for an order of steamed clams and a tall, refreshing glass of draft beer which was limited to one or two choices unlike today where they might have 20 different beers on tap.

Forgive the old guy reminiscing. They were such fun times and I like to share my thoughts.

PLEASE continue to do that. I find it absolutely fascinating to hear stories that happend 50 years before I was born.

I love 80s and 90s country stuff but I also like listening to some of the newer artists.

For the Whizzer. I hope this fits into your range of music motion. It's a large and eclectic bunch of players in your list.

Another one for you Whizzer.

I listen to a large variety of music. My uncle was in Saipan in WW2, he liked and introduced me to big band music.
I like Glenn Miller and Benny Goodman.
Newton Wayland and the Houston Symphony Orchestra, Percy Faith…they recreated some of the big hits and I have them in my music library.
Also have just about everything from Glenn Miller.

donthaveanickname said:
PLEASE continue to do that. I find it absolutely fascinating to hear stories that happend 50 years before I was born.

I love 80s and 90s country stuff but I also like listening to some of the newer artists.
Click to expand...

Read this homily and beyond. 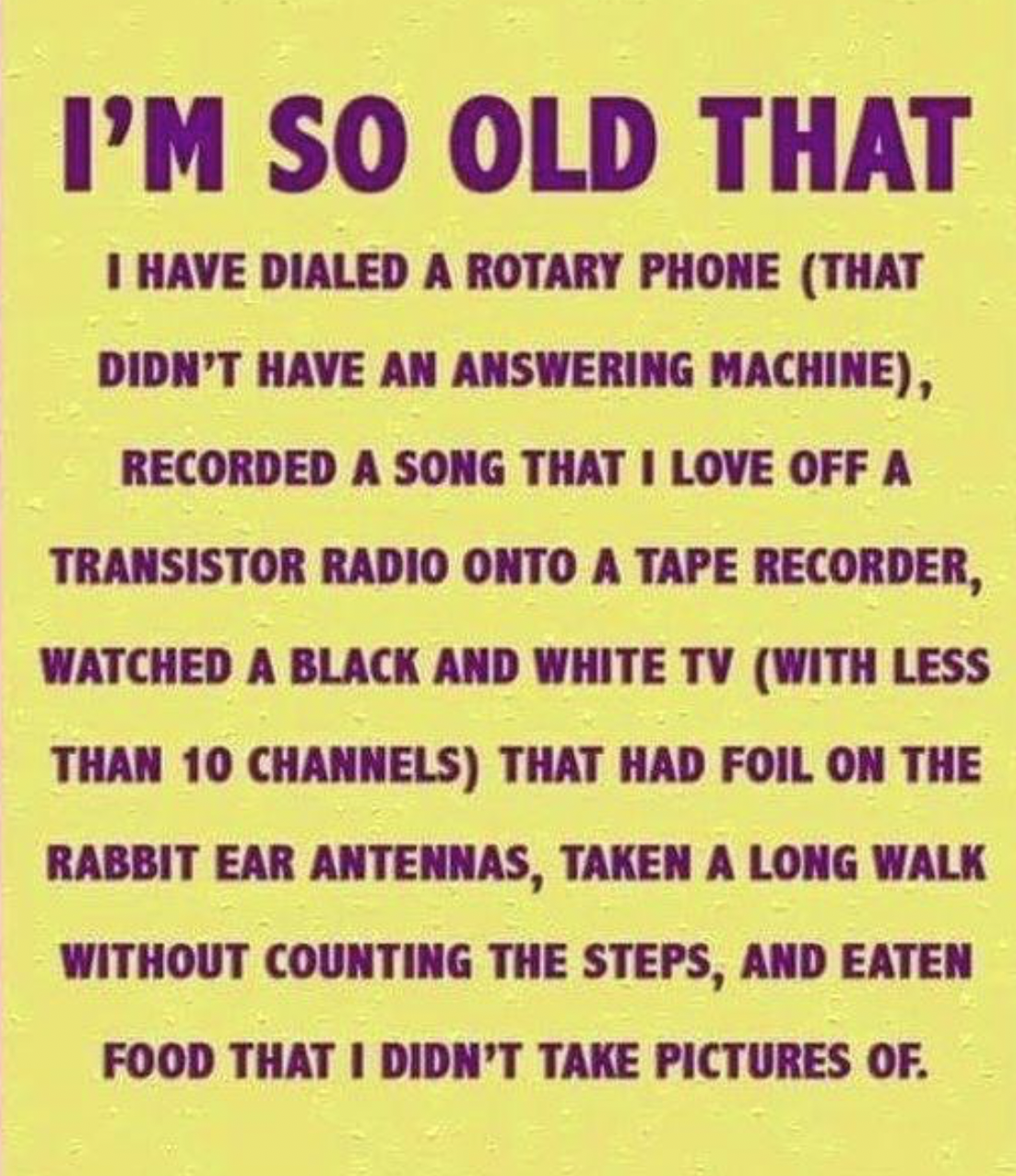 But I, am older than whoever wrote the above.
I'm so old I remember when our telephone number was 145 ( the license number on my father's car was 145 ) and to make a call, you picked up the handset and an operator would answer, "operator." You told them the number you wanted to call and they would connect you. When I was courting my Bride in the early '60s, rotary dial phones were just coming into use. My Bride lived on a dairy farm 5 miles from town and her family was on a party line with several other subscribers. It wasn't unusual for someone to pickup their handset to make a call and if they heard someone else on the line, to listen in. It definitely curtailed any comments regarding your personal feelings. Any calls made out of the immediate area were considered toll calls and subscribers were charged by the minute like the early days of cell phones.
My first transistor radio was purchased in 1954 but prior to that, I had a vacuum tube radio with an antenna wire stretched across my bedroom ceiling and certain times of the year I could listen to radio stations broadcasting from Wheeling, WV (WWVA) and Shrevenport, Louisianna, KWKH and the Louisianna Hayride to the Grand Old Opry from Nashville on WSM. The transistor wasn't any better at reception, just smaller in size.

FM radio was just coming into being in more areas around the mid to late '50s and listening to a.m. radio could be a challenge with thunder storms and fading in and out signals. Traveling any distance in a car meant constantly changing stations as they faded in and out the further you got from the signaling tower.

My Dad bought a Fada television set with a 12 inch screen. He had a telephone pole installed in the back yard with a television antenna mounted on top in 1954 and I recall coming home from high school and watching the McCarthy hearings until the truck delivering the Newark Evening News came by and that meant it was time for me to start my paper route of 64 papers over 6 miles distance and running from the street to the front door of each house to leave a paper if it was too far from the street and most of them were too far from the street.

Wrestling on Saturday nights was a big must watch and my hero was Antonino Rocco, the drop kick specialist. A far cry from the modern day WWF matches. When the wresting matches were over, the screen displayed a channel logo until the next morning when broadcasting began with the National Anthem.

I love to recall adventures from those times in my life. Every now and then someone will say how good it was back then but giving it some reflection, it really wasn't much different than today. We feared nuclear attack from Russia, polio was a crippling potential deadly disease with no known cure. It was a lot like Covid-19. Medical science has come a long way since then and people like SDJ and me might not to be alive were it not for advancements in heart disease medical science.

Polio was nearly eradicated in the U.S. until recently when it reared its ugly head once more.

I think of the changes I've seen in automobiles and then reflect to the days my father told me about where when, as kid (my father was born in 1901) if they saw a car tire track as they walked two miles to go to school, they played hooky and followed the tire tracks in the hope of seeing the car. My parents saw the first man on the moon, a phenomenon considering the first flight was in 1903.

My Mother played piano in a movie theatre that showed silent films and she witnessed 3-D movies after telling my sisters and me about how wonderful it was to hear Al Jolson sing on the silver screen for the first time.
If interested, I can always embellish more as I love to write but understand not everyone likes old fart reminiscing.

Summertime by Sam Cooke. Cooke was truly a legend.

If you like Texas swing try the DeRailers. Their first few albums with Tony Villanueva and Brian Hoofed were pretty good. Tony left the band several years ago and Hoofed has tried to carry on but the sound and arrangements are not the same.

Whizzer said:
If you like Texas swing try the DeRailers. Their first few albums with Tony Villanueva and Brian Hoofed were pretty good. Tony left the band several years ago and Hoofed has tried to carry on but the sound and arrangements are not the same.

The pedal steel is awesome.

And that incredible Dobro…

I am going to like almost any Country Music from Austin City.

Many people including some all time greats have covered Towne Van Zant's "Pancho and Lefty". The storytelling is incredible.

Tommy Alverson is not one of the most famous ones to cover the classic but I think he does it very well. I like his cover and the one by Willie Nelson and Merle Hagard the most

If you can listen to this song by Patty Loveless and not feel everything Patty pours out in the song..... well I would have to just pity your worthless and souless existence.

ELO, so many great songs