This is just like when Dale Earnhardt died. It's a loss of the same magnitude

Saw alot of these two this season. She was developing a real love of the game and they watched quite a few Laker games, also flew out to several mavs and hawks games due to her fanhood of Luka Doncic and Trae Young.

Just opened up Chrome on my tablet and saw this at the top of my suggested articles feed. I cannot believe it. I have no words.

I never have watched basketball, but most everyone knew who Kobe Bryant was. The guy was a legend and will definitely be missed.

I can't imagine what his wife must be going through
M

Mr. Gregory said:
Just opened up Chrome on my tablet and saw this at the top of my suggested articles feed. I cannot believe it. I have no words.
Click to expand...

Same experience. Absolutely terrible news. I'm so sorry for his family and all of those close to him. His last tweet appears to have been a congratulations to LeBron for passing him on the all-time scoring list.

Legend. One of the greatest to ever play.

Just reading reports that many different NBA games that are playing today have started with the teams running out the 24 sec shot clock off the tip off as a show of respect.

Today is the second day in my life the death of a complete stranger shook me. First was in 01 when Dale passed and that got to me for a variety of reasons the most being it was the first time I seen my dad cry. I’m 35 grew up a Jordan fan but Kobe was a close second, today is a bad day.

Meanwhile, the Lakers are on the team plane on the way from Philly as we speak. God the mood must be unreal.

I dont keep up with basketball but what I have just read about Kobe its
amazing he was drafted to the NBA out of high school and played his
entire 20 year pro career with the L.A.Lakers. He , his daughter,
daughters team mate, and team mates parent were on their way to the
kids basketball travel team game (wiki). Just a sad tragedy .

Snappy D said:
Today is the second day in my life the death of a complete stranger shook me. First was in 01 when Dale passed and that got to me for a variety of reasons the most being it was the first time I seen my dad cry. I’m 35 grew up a Jordan fan but Kobe was a close second, today is a bad day.
Click to expand...

Right there with ya bud.

The world lost a lot today

So, I only casually watched the NBA as a kid (naturally, I loved Michael Jordan and the Bulls), but I actively, seriously followed it for five or six years: from the 2002-2003 season to the end of the 2007-2008 season, when my all-time favorite player, Kevin Garnett, finally won his NBA Championship with the Celtics. (After that, I just started peeking in on it every once in a blue moon.)

I was never really a Lakers fan during those five or six years, nor was I much of a Kobe fan, but man, I always respected his talent. As others have said, whether you have ever paid any attention to the NBA or not, you've probably heard of him. He was unquestionably one of the greatest to ever play the game of basketball. I'm still in complete shock over what has happened today and probably will be for a while.

R.I.P also to his daughter. that's just so so damn sad.

Damn Sheriff just said there were 9 people on board

kkfan91 said:
Damn Sheriff just said there were 9 people on board
Click to expand...

I’m a Laker Fan, I remember the excitement when he was drafted.

What type of helicopter fits 9 people? Been looking around and the consensus seems to be 6 max.

Reck said:
What type of helicopter fits 9 people? Been looking around and the consensus seems to be 6 max.
Click to expand...

I believe he was in a Sikorsky S-76B, which can have 12 passengers. 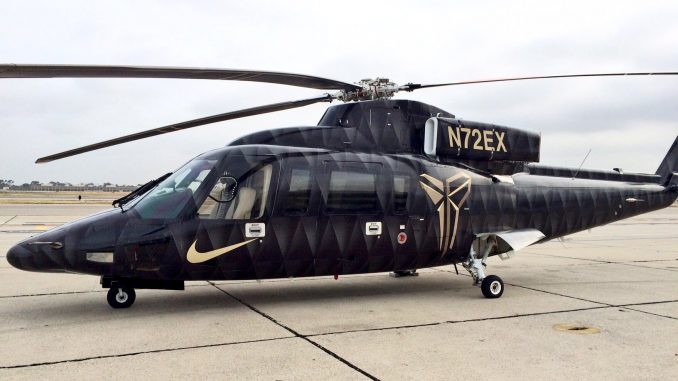 This one looks capable enough for 9.

Source? I've not heard that.

MAGICMILER said:
Source? I've not heard that.
Click to expand...

It was posted in this thread, ABC originally reported 4 kids, then no kids, now 1 kid.

Michfan said:
It was posted in this thread, ABC originally reported 4 kids, then no kids, now 1 kid.
Click to expand...

Oh. I thought you were responding to @recks vague post. I still didn't see it in this thread. Maybe it was deleted..

My prayers to all those on the plane who were involved. Nine lives were lost and its hard to even describe, honestly. I'm extremely sad for Vanessa Bryant and her three daughters who are still here with us.

Not to mention, losing the next generation in one of his daughters (Gianna) is heartbreaking. I'm at a loss because I watch and follow basketball and Kobe was the superstar I was blessed to witness through my youth.

May his legacy continue to live on.

Unbelievable I remember back in high school how many Kobe fans there were in Northern California. Never was much of a Laker fan but Kobe was a hella of a player and it's a horrible loss to his family who is going through a lot missing a husband/father and a daughter/sister. Also a loss to the younger players, it's always nice to see games where Kareem, Magic, Larry Bird, or Michael Jordan show up but Kobe no longer being there will leave a void to bridge those age gaps.

Witnesses are saying the helicopter was sputtering and appeared to be looking for a place to set down...

I just envisioned her being the future megastar that the WNBA needed.

We are the people our parents warned us about

I'm not a basketball fan, but stunned is how i feel.

My heartbreaks for the families affected from that crash, there are multiple families that are torn apart because of this.

From a sports perspective, as a fan, i can only relate it to the death of Dale Earnhardt. I was a massive fan of his from about the time i was 5 years old, it hurt when he died, it left a hole in the sport, from which i've never really recovered from and dont watch as much. Dale Jr helped fill that.

Those young adults that grew up watching him, i feel for them too.

Such sad, shocking news. Sports world lost a great one.