Congrats to @RayinTX for winning the Coca-Cola 600, one of the 3 amigos that won from last week's COTA, that marks his 2nd win of the season and vaults him into the early summer segment lead as well as 2nd place in the overall standings.

He also sets a NEW LEAGUE RECORD of 445! points. His lineup consisted of Elliott/Larson/Byron/Suarez. Larson being the highest-scoring driver of the race.

I made my picks 5 days ago and completely forgot who they are.
Think I will not look and just enjoy the race.

I enjoyed the race. Then when I looked at my picks,
Allmendinger was one of them. D O H !!!!!

DanicaFreak said:
Is 415 a good score?
Click to expand...

It is, quite possibly a winning score.

DanicaFreak said:
Is 415 a good score?
Click to expand...

Fantasy well done by @DanicaFreak winning at Sonoma for his 1st win of the season and moves into the top 5 overall standings.

His lineup included Elliott/Larson/Bowman/Suarez for another winning score over the four hundred mark (405).

@pjmolo strikes a tune in the music city

for his 1st win of the season and another Big score over the 400 mark.

His lineup choices included Elliott/Larson/Byron/ and Chastain in C-list. And he now moves into the top 10 overall standings (3rd in Summer Segment).

Having picked Chase Elliott at Nashville last week it's good to see that the game's administrators didn't use his disqualification finish of 39th but instead used his 13th place at the finish line.

pjmolo said:
Having picked Chase Elliott at Nashville last week it's good to see that the game's administrators didn't use his disqualification finish of 39th but instead used his 13th place at the finish line.

I thought for sure a points correction was on it's way, after making that win post without knowing about the loose lugnuts on the #9 car.

it's been a hot button topic in some other leagues since it wasn't established this year (and points have been stripped in prior years, the 48 car last year)

Recent addition to the default rules by the DGG admin:
"(ADDED 06/21/2021): Finish Position is the driver's standing order at the end of the race. If a driver is disqualified as a result of post-race inspection, it will not change the driver's Stage Positions, Finishing Position or Laps Led."

looks like that's what he's wanting to do now and in the future (less work for him to have to go back thru and redo-scoring) so I get that part of it, but changing mid-season without having established in the rules, not sure I can get onboard with that one. I can at least take some comfort in knowing he's adopting the same scoring policy on post-race inspection DQ as DraftKings does.

Stands as finished and the

We're onto race #20 at Road America next week, while we currently have 13 different race winners on the fantasy season, thanks to continued hard fought play.

I got off to a pretty decent start back in February, but I've been terrible for the past month. I hope I fare better at this game next year. There's zero chance I win this year. I'll keep playing anyway just for fun.

A persistent @pjmolo got his 2nd win on the season last weekend at Atlanta and moved himself into the top 5 overall standings, along with joining what looks to be a 3 car battle for the Summer Segment between @RayinTX and the turtle. He won it with a lineup of Elliott/Busch&Busch/Chastain picking the winner of the race Kurt Busch in B-list (the magic choice).

5 races until the fantasy Playoffs begin yet we already have our 16 active driver's set (will post standings after New Hampshire).

current leader is officially out of Larson and Byron allocations and will now attempt to hold on for dear life... with another Daytona & Dega on the horizon.

Loudon :
5 of us took a direct hit with the KyBu pick.
Snappy D was the only one with an Almirola pick.
Final results coming soon.

after winning New Hampshire for his 3rd win of the season, his selections were comprised of Harvick/Bowman/Blaney/Stenhouse for a total of 360 points. Additional shoutout to @Snappy D for having been the only one brave enough to have started Almirola, the eventual race winner in B-list. (apologies for the delay as it took quite some time to be reunited with such laptop to post standings)

Here is the Overall as we stand: 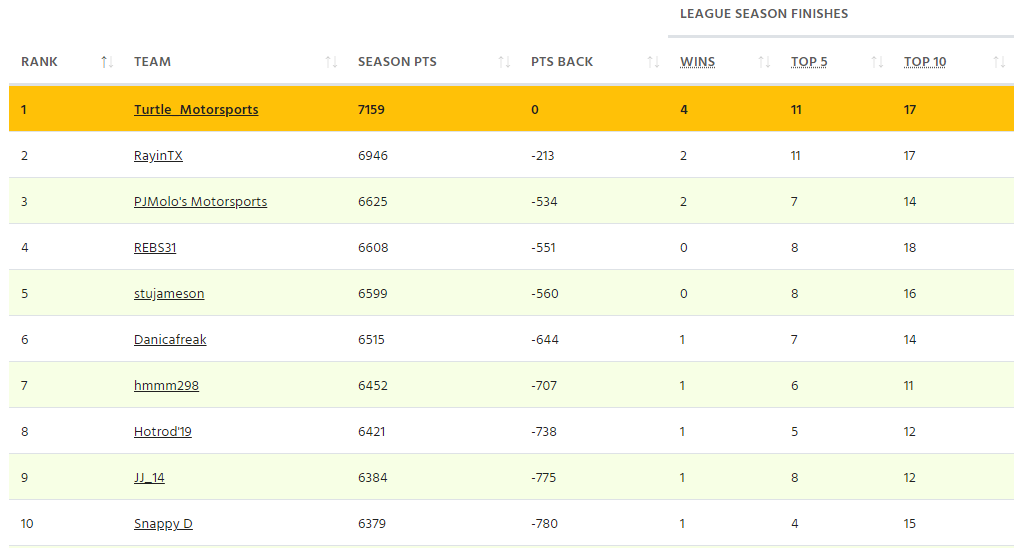 Here are the Summer Segment standings that continue to be a hotly contested 3-car battle at the top. Can a 4th car join the party? We shall see... 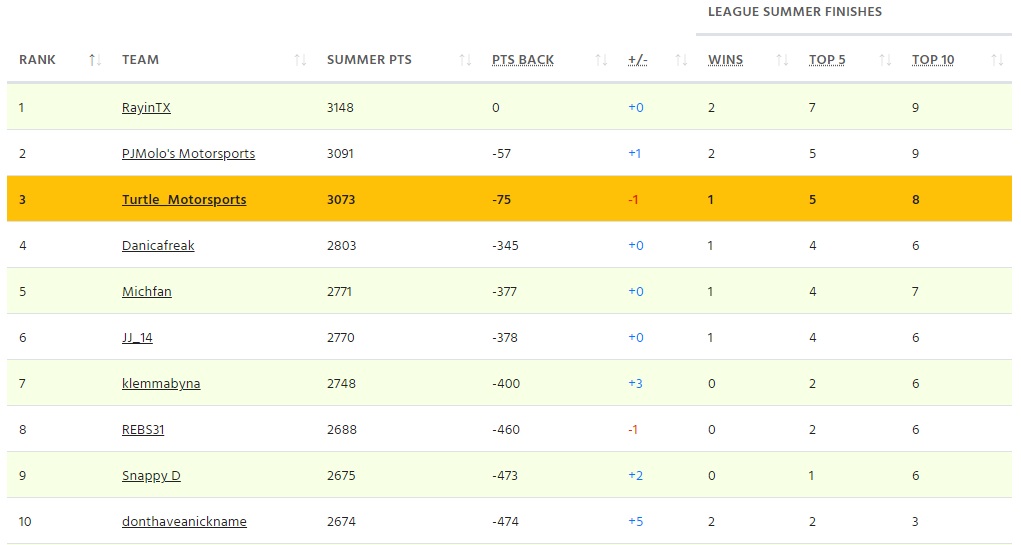 Thanks again to everyone for playing.

Congrats to @Snappy D for taking home the trophy

at The Glen last weekend, his 2nd win of the season.

and @pjmolo kisses the bricks

at the Brickyard today for his 3rd win, all during the summer segment

. He takes the lead in the segment.

, grabbing his 1st win of the season with consistent performance, he sits top 5 in the Overall.

racking up his 3rd win of the season at an unpredictable plate track, no easy task.

by an impressive margin.

the turtle continues to hold the Overall lead in clean air

The Man the Myth the Legend the Creator himself of the DGG website will be at the Bristol Night Race if you desire an autograph and wish to meet him.

also, New Discovery on the DGG website of Awards and Trophies that I am able to create and add to each player's profile that will display in your Trophy Room tab on the website in collection, will be adding those in for this season as I can find the time.

in the Round of 12 RFFL winning 2 of the 3 races, first by taming Darlington, and then flexing some playoff muscle in the Bristol Night Race

. He now move's into a tie for 1st place in the Playoff standings, and a tie for the season most-wins with 4 total. Solidifying his position in the top 5 overall while looking to unleash more firepower in the Playoff segment.